For decades, Fairlight Cove has attracted residents thanks to its picturesque coastline and views stunning out across the English Channel. 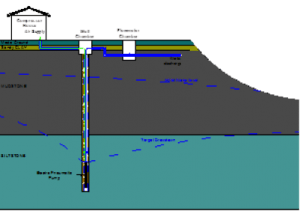 However in recent years the erosion of the coastline has been up to 25m a year. After the loss of several properties and the ever encroaching sea getting closer to many more, something had to be done.

Following an investigation by the local authority, Rother District Council, several schemes to slow the erosion were produced. These included a rock bund at the base of the cliff, as well as a groundwater control system. However, it was discovered that the instability in the cliff slopes was partly driven by high pore pressures within the clays, silts and sands that the cliffs are made up of.

It’s at that point that WJ were called in. Following our own thorough investigation and analysis, our immediate priority was to install an array of 56 wells near the top of the cliff. These penetrated down through the unstable mass and a central compressor house provided the compressed air used to drive the pumps. The operation was successful – groundwater levels were controllably lowered, reducing the water pressures within the slip planes and therefore helping to stabilise the slopes.

Faced with rising sea levels, scientists insist it is inevitable that many small coastal communities will be lost to the sea. As a result, only the largest, most important ones will be protected by concrete and stone sea defences. We extremely proud that the frontline at Fairlight has, for now at least, been bolstered by the efforts of the WJ team.