The year is 1981. A pint of milk costs about 19p, a loaf of bread about 37p, and Prince Charles and Lady Diana Spencer have just got married. Britney Spears, Serena Williams and the Wispa Bar are all born. A truly remarkable year already I’m sure we can all agree – however 1981 isn’t memorable only for these events, but also for the formation of WJ Groundwater!

On the 21st of September 1981, Professor Jim White and Professor Stephan Jefferis both at the University of London, Kings College, formed “Sprucewing Limited”. Later that year Sprucewing became “WJ Engineering Resources Limited”, who would go on to become the WJ Groundwater that we are today.

As a company the first significant investment was in a logo, by Canadian graphic designer Bob Williamson (cost £900.00), which now adorns our drilling rigs, dewatering plant and equipment worldwide.

Initially WJ was a consultancy business and involved in projects ranging from modelling of a dam spillway, swimming pool wave machine design, investigating acid contamination below a factory through to design of dewatering systems. WJ started undertaking contract dewatering work from 1982.

During the early days of WJ the contracting operation employed less than half a dozen people, including Toby Roberts (current WJ Chairman) and Jackie Lee (still keeping our offices clean and tidy), and operated out of one of the gate houses at HiIlfield Castle, Aldenham on the outskirts of London – far away from the 100s now employed by WJ across the world in countries as diverse as the UK, Canada, Poland, Israel and the United Arab Emirates (amongst many others). The first full time site staff were Supervisor Bill Ratcliffe and Operator Frank Hall who stayed with WJ until their retirement.

As the old English proverb says, ‘From tiny acorns mighty oaks do grow’, and during these early days WJ’s projects mainly focused on the installation of wellpoint dewatering systems with projects including Bromley High Street and Hayes Dock, which is now the site of the magnificent Hayes Galleria adjacent to London Bridge Station.

In fact, it took until 1985 for us to undertake our first deepwell dewatering system, when we installed a scheme for a pumping station at Grove Farm (the first of a number of visits to this site over the years).

By the late 1980s WJ were becoming established in the construction industry in the UK. The pace of growth stepped up sharply from 1988 with WJ’s success in winning the dewatering contract for the £190m Conwy Crossing project in North Wales led by Mick Falkingham (subsequently Contracts Director WJ) ably supported by Martin Preene (subsequently WJ Technical Director, and now an independent groundwater consultant). At the time, the Conwy Crossing was the largest and most technically challenging dewatering project in the UK involving the first large scale use of ejector dewatering in the UK.

One of the first major projects WJ were part of, and now home to shops, bars, and offices of Hayes Galleria 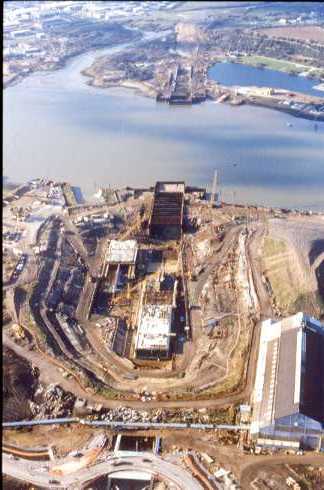 After our success on the Conwy Crossing project the 90s were an exciting time at WJ with the establishment of new offices at Bushey and yard facilities at Chester in the UK with major projects at Sizewell B Power Station, Canary Wharf, the Medway Tunnel, Jubilee Line Extension in London and Cardiff Bay Barrage projects, alongside over 1,000 other projects. WJ were also commissioned by CIRIA to produce the best practice manual Groundwater control: design and practice CIRIA C515 (2000) recently updated to second edition C750 (2016) authored by Dr Martin Preene, Dr Toby Roberts and Professor William Powrie (University of Southampton and WJ consultant).

In 1999 Richard Fielden (Now WJ Managing Director) and our then Drilling Manager, Carl Gawtry, chose Soilmec to supply our first rotary drilling rig, bringing all the main site activities for dewatering system works in house. This has subsequently grown to a fleet of 25 rigs world-wide.

WJ first visited Canary Wharf in London’s docklands, in the late 1980s and have played a major part in its redevelopment ever since

After undertaking consultancy based contracts in Italy and Nigeria in the early 2000s, WJ became a fully-fledged international contracting company with our Dubai Office opening to manage our works for Terminal 3 at Dubai International Airport in 2003. This was the first of a number of international offices that we would open – Oman, Qatar, Poland, Canada, Turkey, and Israel (in joint venture with LDD).

During this period our UK head office grew significantly moving to new premises in Kings Langley, opening a new state of the art yard in Bilsthorpe. This expansion was underpinned by success in winning groundwater control work for major projects on HS1 (formerly known as CTRL), Crossrail (now the Elizabeth Line), Thames Tideway, and more recently HS2 as well as 1000s of smaller projects.

2018 was a significant year for WJ with the forming of the global WJ Group, and the individual business units of WJ UK, WJ Canada, WJ Poland, WJ Middle East, WJ Qatar, WJ Kuwait, WJ Turkey and LDD-WJ in Israel, and we have become one of the ‘go-to’ contractors for dewatering globally having worked on numerous high-profile international projects including the London 2012 Olympic Park in the UK, the Eglinton Crosstown LRT project in Toronto, Galata Port in Turkey, Lodz Fabryczna rail terminal in Poland, Lusail Expressway in the Middle East and the Red Line Metro in Israel.

It is hard to think that 40 years ago WJ was a small company with just a few employees operating out of a makeshift office, and now we have approximately 280 directly employed staff, and another 25 associates, in 8 offices globally. We’ve worked in 20 countries across the globe and have completed 100s of projects over £1m in value, and over 50 over £5m in value, including some of the largest construction dewatering contracts in the UK, Canada, Poland and Dubai.

Hopefully over the next 40 years there won’t be a country in the world we haven’t visited!