Located at the heart of the increasingly trendy Nottingham (its University, in particular, is enjoying its highest popularity ranking ever at present), Nottingham One celebrates new heights in residential city living. 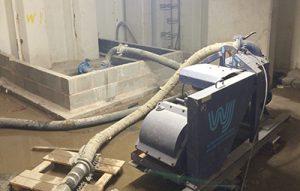 A series of new build waterfront apartments with views of The Castle, The Lace Market and to the south of the city.

This new collective of studios, one-beds and two-beds required a double basement car park due to the pre-existing space being historically plagued with water leakage problems due to poor base slab construction.

WJ’s help was enlisted for a project involving the designing and implementing of a dewatering system that would enable the reduction of the groundwater levels and the subsequent facilitation of the construction of a new permanent sump pump system to cope with these inflows. In order to reduce costs and programme disruption, WJ actually reused dewatering wells that we had installed previously some years before for the original basement construction. This was achieved by ‘breaking out’ the slab at known locations.

This dewatering scheme included substantial sump pumping to control the high flows that were encountered during the well uncapping exercise. To ensure compliance with the discharge consent, Wj ensured that all abstraction flows were recorded. The client could therefore be confident in the reliability and longevity of the work completed.