WJ Groundwater hits a six at the ‘Home of Cricket!’

WJ Groundwater is proud to be associated with Lords Cricket Ground for a new project.  There’s nothing quite like working on a pumping test project at a world famous sporting ground, and in the Cricket world, there’s no place better known than Lords. 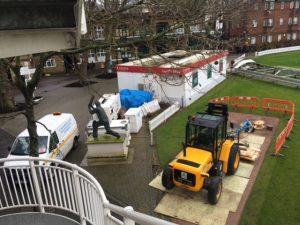 WJ Groundwater has been commisioned by contractor; Magpie Drilling Ltd to test a geothermal well. Under project leadership from Paul Beacham (Monitoring Supervisor), our team of specialists have been pump testing an abstraction and recharge well drilled by Magpie. The wells will be used as open loop geothermal wells when completed, helping Lords to reduce its energy usage and reduce costs.

Lord’s is widely referred to as the ‘Home of Cricket’ and is home to the world’s oldest sporting museum. Named after its founder Thomas Lord it celebrated it’s 200th Anniversary in 2014, at it’s current location (it’s 3rd). Much of Lord’s Cricket Ground was rebuilt in the 1990s. In 1987 the new Mound Stand was opened, followed by the Grandstand in 1996.

“WJ Groundwater is very happy to be working at such a high profile location. Our procedures have to be carried out with high-degree of care during the operation because of the site’s heritage,” said Richard Fielden (Managing Director). “Nonethless, we are used to working in sensitive locations and minimising the impact to the site and the public. Lords is a great addition to our portfolio of previous projects at sports grounds which includes Cardiff Millennium Stadium, Wimbledon  and White Hart Lane (the new Tottenham Hotspur FC stadium)”.

The testing was commenced in January and is expected to be completed in February 2016.

WJ Groundwater is an industry expert across a range of infrastructure sectors that includes; ports and marine, motorways, tunnels and shafts, to name a few. We are known specialists in:

Please visit our What We Do page to discover even more about our Groundwater management projects. You can also phone +44 (0)20 8950 7256 to discuss your project ideas and options today.