The Docklands Light Railway (DLR) is an automated light metro system opened in 1987 to serve the redeveloped Docklands area of London. 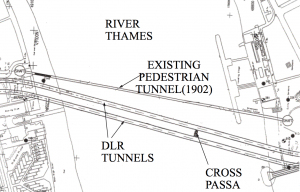 It reaches north to Stratford, south to Lewisham, west to Tower Gateway and Bank and Monument in the City of London financial district, and east to Beckton, London City Airport and Woolwich Arsenal. The system uses minimal staffing on trains and at major interchange stations, making it semi-unique as far as metro rail systems in Britain go.

When the DLR was to be extended to Lewisham, a tunnel crossing of the Thames at Greenwich was required and WJ – with their considerable experience and expertise in construction for transport – were enlisted.

A cross passage with sump was required between the running tunnels at the low point below the river. The cross passage horizon was in the Thanet Sand with an excess head of up to 3 bar. The scheme was successfully delivered using a combination of measures, including the pumping of chalk wells in the river bed; a power supply to wells split between on shore and a barge-based generator; and tunnel wellpoints. The use of wells installed in the tidal reaches of the Thames was a reasonably uncommon and innovative application of deepwell technology, requiring pump installation by divers.

Absolutely key to the success of the scheme was the reassurance provided by a real time monitoring system which gave project staff full data access and even included an alarm function to warn of pump outages or rising groundwater levels.

Technology that gives credence to our confidence as suppliers in turn furnishes our clients with utmost confidence in our ability to deliver.